To celebrate New Year’s Day (and because everything was closed in Cuenca for the holiday), Two Who Trek hopped on a bus with fellow travelers and headed for Cajas National Park, located about 30 km to the west of Cuenca.  The road to the park was very good, primarily because the park is located on the main route between Cuenca and Guayakill.

A view of Cajas National Park from the road.

Cajas National Park is important to the entire region. The Rio Tomebamba, four blocks from our apartment, originates in Cajas and supplies Cuenca and other cities with good drinking water.  No livestock is allowed in the park to help keep the water source pure.   The park itself has over 167 lakes that are bigger than 2.5 acres and over 750 spots containing some type of water. 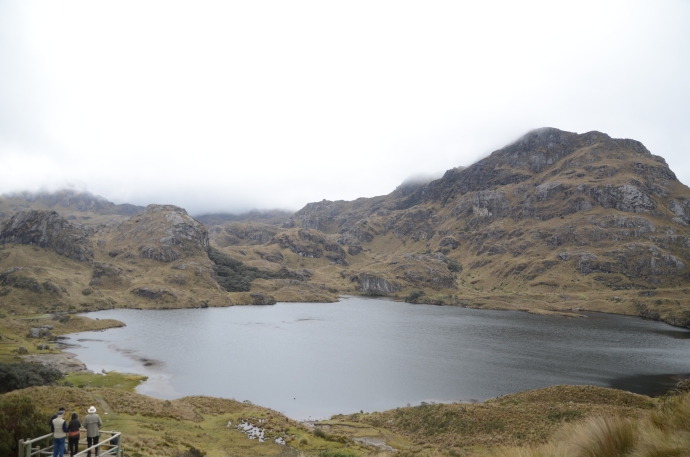 One of over 700 lakes in Cajas National Park

Another lake in the Cajas National Park.

The park covers about 28,000 hectares and crosses the continental divide.  Our bus slowly climbed the mountain to group visit the Tres Cruces (Three Crosses) overlook at an altitude of 4167 meters or 13,671 feet above sea level.  This point is on the continental divide for South America. The weather was cold and misty.   Even though we were accustomed to higher altitudes (Cuenca’s 8,800 feet) the almost 14,000 feet took away our collective breaths.  We went to a lower altitude in just a few minutes. 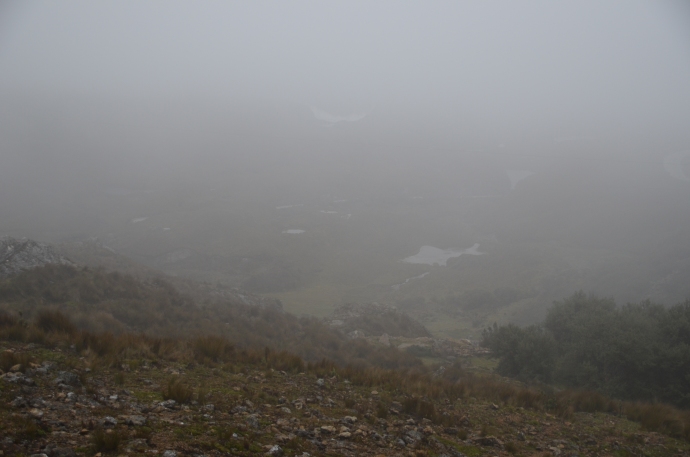 The foggy, misty view from the Tres Cruces outlook site. And it was cold, too.

The three crosses were placed to commemorate the fact that many people died at that point from altitude sickness.  With modern transportation, the danger no longer exists.  However, travelers often place rocks on the crosses in a prayer for safe travel.

Paper trees or Polylepis are one unusual resident of Cajas.  They are found at heights greater than 10,000 feet.  This evergreen has thick, layered bark that is shed to protect from insects.  Paper trees also have a symbiotic relationship with moss.  Our guide explained that the moss is protected by the tree and the moss holds in much needed moisture around the base of the tree.

The bird is the word.  More than 150 species of birds call Cajas National Park home for at least part of the year.  Today was cold and misty so the birds were not to be seen.  Much to Sherri’s joy, a mama llama and her baby, or cria, were grazing near the entrance to the information center.

Upon our descent from the mountain, we stopped just outside the park at a restaurant named Dos Chorreras.  This restaurant is part of a trout-raising operation, with over one million trout present at any time.  The restaurant is integrated with the natural environment, so much so that a stream runs through the building and makes a waterfall in the lower level. 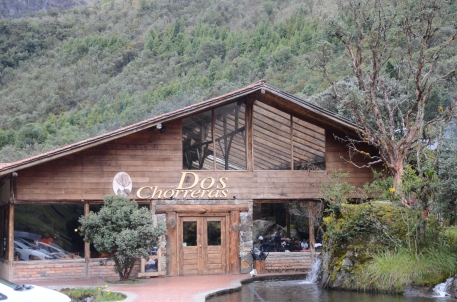 Waterfall inside lower level of restaurant.

Large stones inside the restaurant.

The restaurant is built around a stone outcropping. 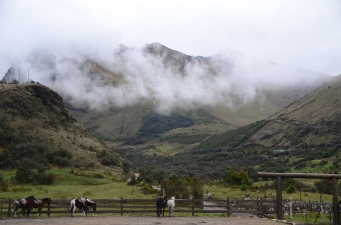 Sherri had the fried trout (with the head remaining) and Joe had the grilled (headless) version.  Both types of preparation were excellent.  Back to Cuenca, as the next day was the first day of school! 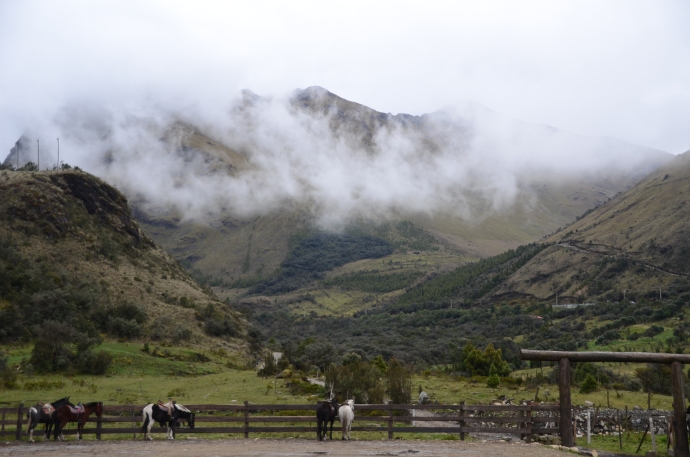