UPDATE – 1-23-2013 — Two Who Trek attended a presentation yesterday and found there are many more Christmas-related celebrations.  For example, Cuenca holds a Christmas parade that is over 8 hours long.  Plus there is the Festival of the Wikis (no, not information sources.  In this case it is a native word for tears) that starts three days before and ends three days after Christmas.  Daily celebrations occur on the twelve days following Christmas.

Please consider this blog post as being just what Two Who Trek have seen during their stay.  It is not meant to be a complete listing of all the Cuenca celebrations.  If we provided that, WordPress might run out of server space!  Now the original story:

As Two Who Trek wander through the streets of Cuenca today, the city seems a little less festive.  That’s because the Christmas lights and displays have been stored for another year.  But when we first arrived, we marveled at all the decorations Cuenca had throughout the town.

Cuenca really goes all out for the holiday.  There are lights and decorations everywhere.  Many of the main streets have lights across them, just like in many U. S. communities:

Christmas Street lights in the heart of Cuenca

Businesses get into the spirit.  Here a broadcasting tower to the north of the historic center of Cuenca sports the symbol of the season: 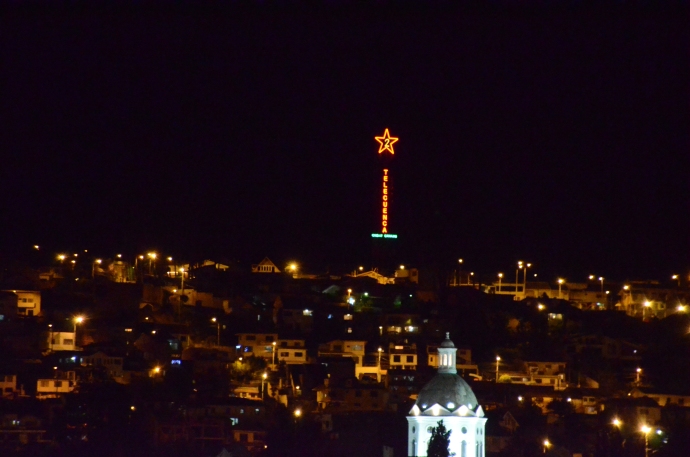 Cuenca city government does much to celebrate.  The Tomebamba River separates the old town of Cuenca from the new part.  On both sides of the river, the city provides an excellent biking and walking path so that one can enjoy both views of the river and of the hanging houses on the edge of the old city.  The pathways are decorated with different objects made of colored aluminum foil and lit with electric rope lights.  A huge effort goes into placing and wiring these devices. 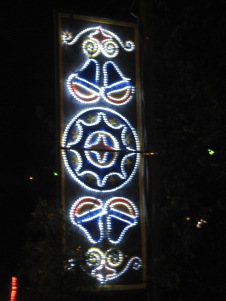 The crowning touch is a nativity scene unlike any other we have seen.  On a plaza next to the river, near the southern boundary of the old city, the nativity stands.  It is covered with reflective colored aluminum foil and lit electrically. The main figures are over three stories tall!  Here are some photos of the display:

The huge nativity scene in Cuenca as seen from across the river.

We liked the moon in this one (not a part of the display, normally)

Even new brides like to have their photos taken at the Cuenca Nativity Scene.

Nativity figures are covered with lights featuring changing patterns.  Here’s a short video of the display in action.  We just wished the big truck wasn’t parked in front of the display, as the lights are much prettier.

The lights stay on for the twelve days of Christmas following December 25.  On the twelfth day, there’s a big parade, the Parade of the Three Kings, in downtown Cuenca to mark the end of the holiday period.  Here are a few views of that parade: 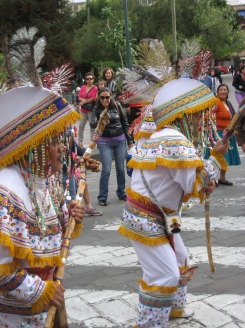 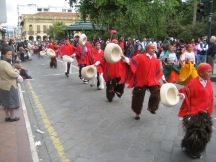 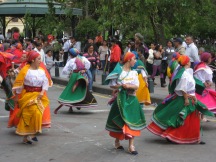 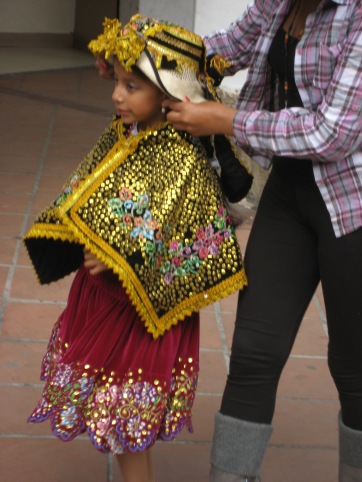 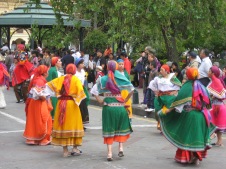 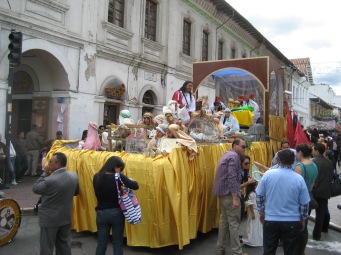 All the displays in the town, combined with the fantastic New Year’s Eve Celebration, make Cuenca an outstanding place to spend the holidays!