For the Birds or Time for Aves Class

To save time on the way to work recently, one of Two Who Trek took the dirt roads.  The Michigan morning was cold and frosty, about a half hour after sunrise.  Out in last year’s corn field, about three dozen turkeys were foraging.  Some were doing presentations while others focused on feeding. While watching the turkeys, birds of a different feather in a different place came to mind.

In Galápagos, we saw birds of many colors. Today we are going to revisit some of them.

The Blue Footed Boobies are interesting conversationalists, according to Joe. 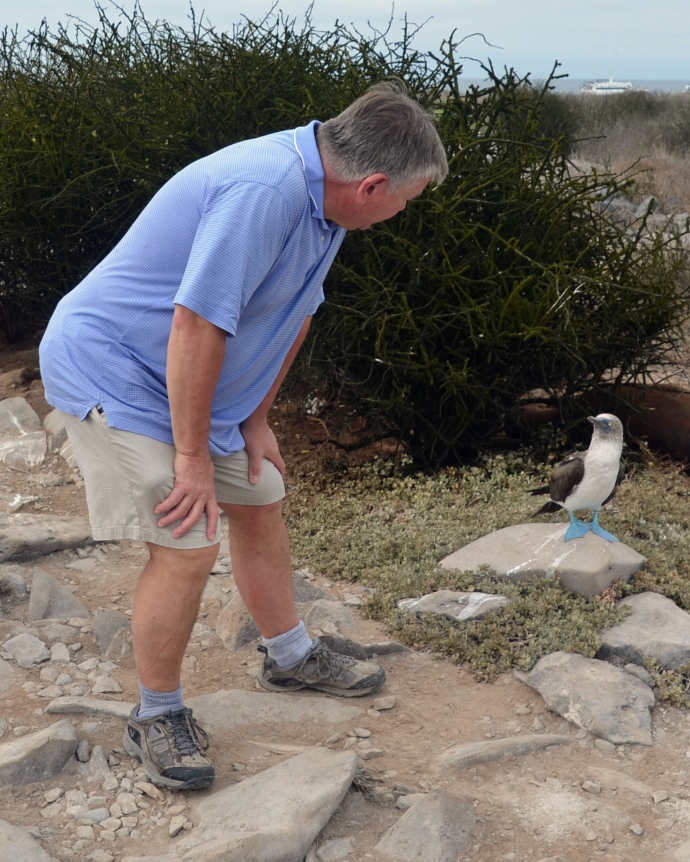 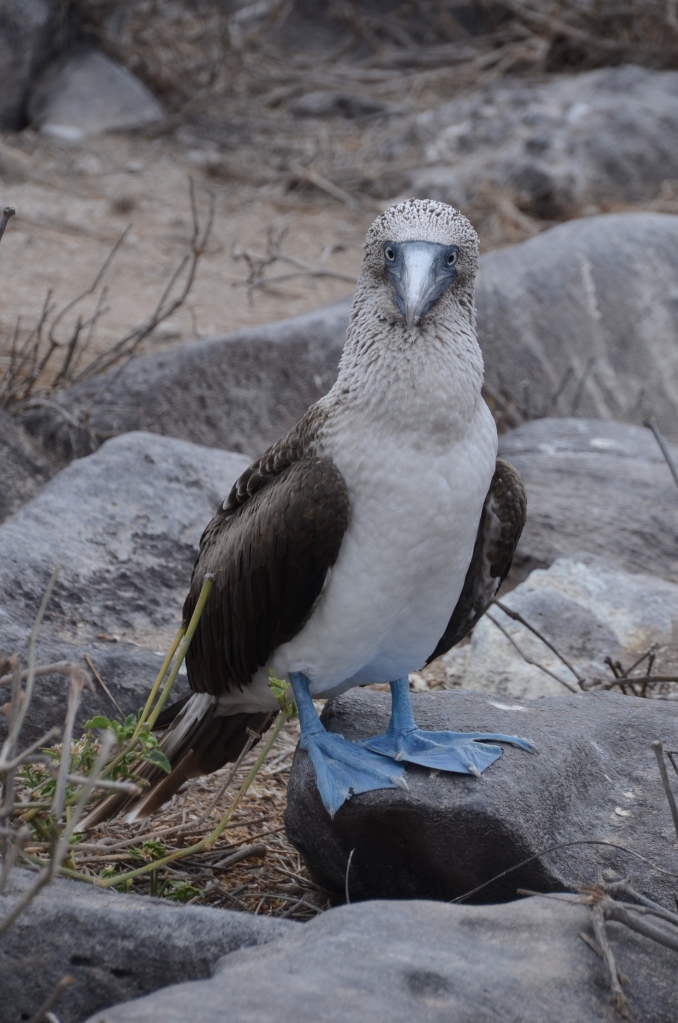 A well posed male blue footed booby, one of the main things we wanted to see on our trip 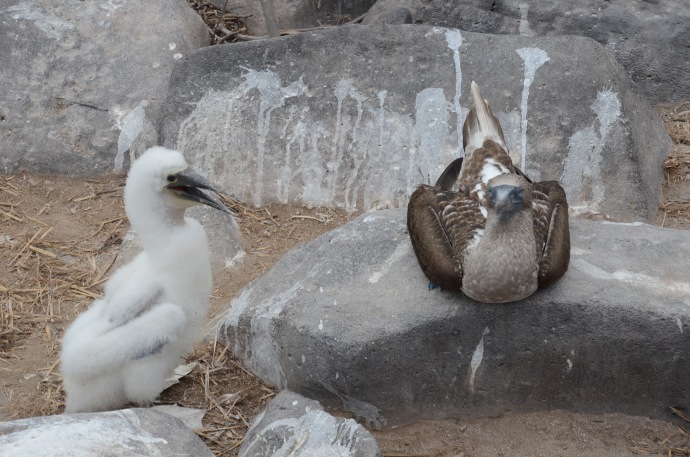 The closely related Nazca Boobies are a bit larger, like to nest near cliff tops, and always lay two eggs.  As the fledglings grow, the eldest ejects the youngest from the nest so only one survives. 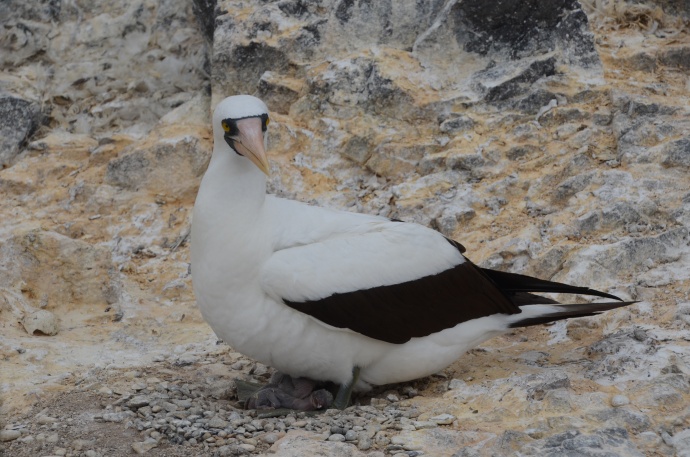 A Nazca Booby guards its chicks that are in a nest on the surface of the ground.

A study of birds can be black and white.  The Galápagos penguin lives farther north than any of the other species of penguins.  The Humboldt Current brings cooler temperatures to the region, allowing this penguin to live its entire life in the tropics. 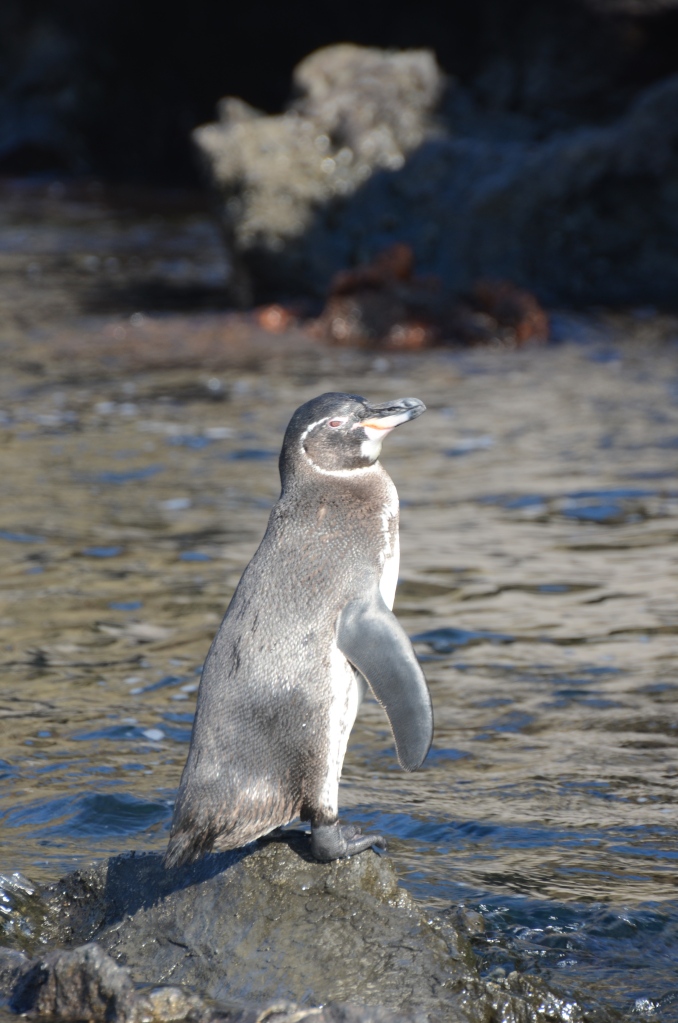 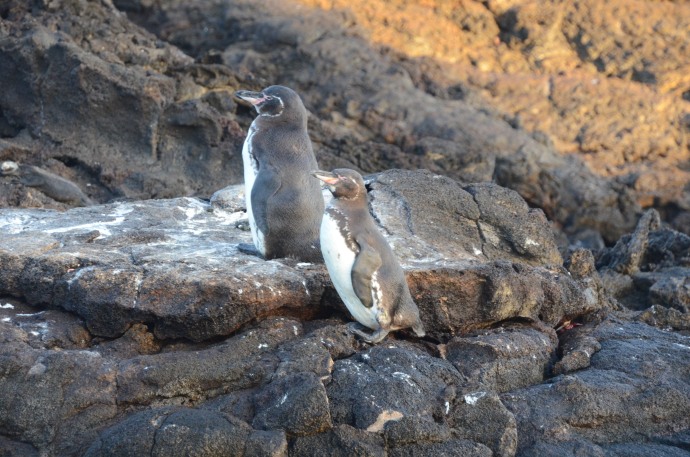 Brown Pelicans, like their relatives in other worldwide coastal regions, scoop up to two and a half gallons of water in their pouches.  The water drains through the bill and the pelican swallows the remaining fish. 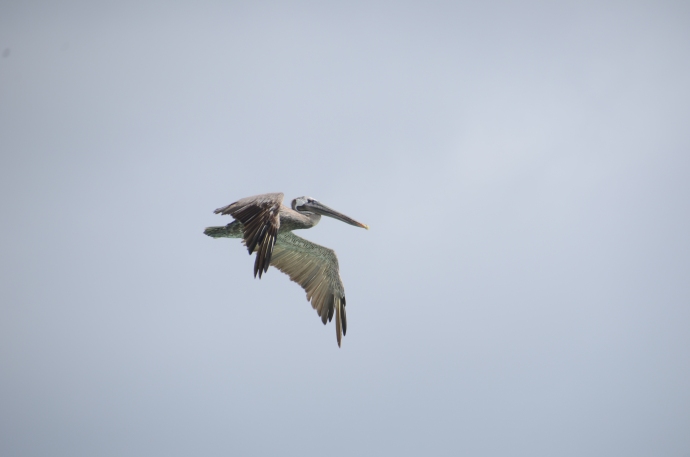 A brown pelican in flight above the Galapagos. 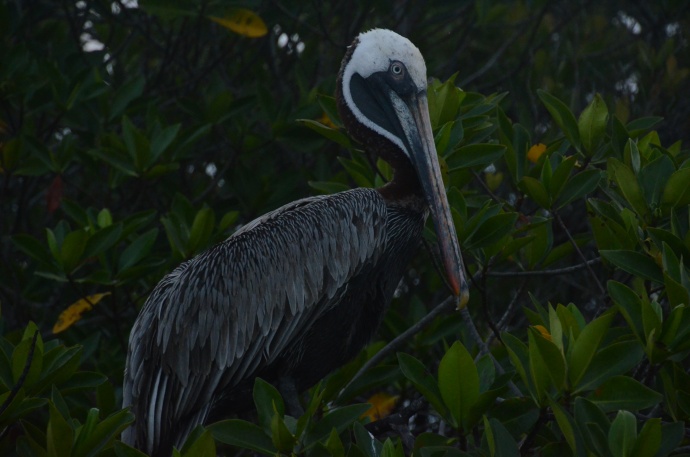 Although we first saw Frigate birds traversing the Panama Canal in 2010, they are still impressive to watch in flight.  They are related to pelicans but have some unique features.  With the largest weight to wingspan ratio of any bird on the planet, the black and white bird has a forked tail and appears to effortlessly snatch food off the ocean’s surface, or from other birds.  During mating season, the male displays a heart-shaped, American football-sized gular pouch in bright red-orange. 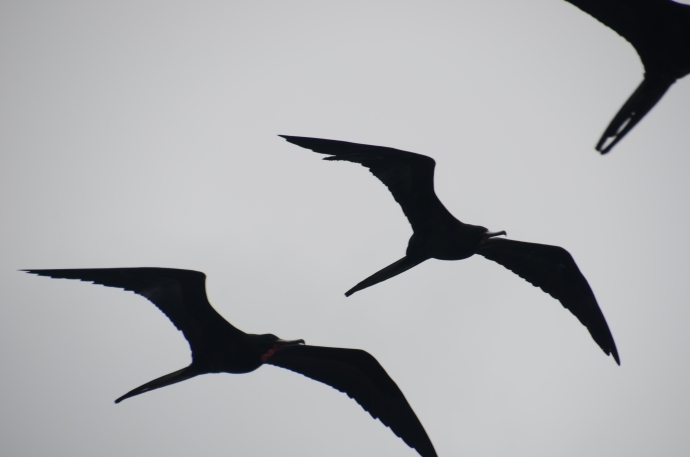 Frigate birds above our ship. 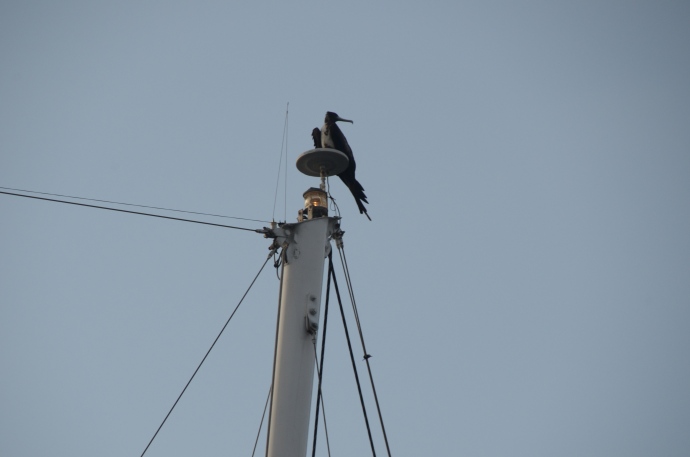 A frigate bird perches on the mast of a ship anchored near ours.

The Galápagos Hawk is golden brown and has no natural predators.  There are about 150 pair throughout the islands and both sexes raise young.  They are endemic to the Galápagos. 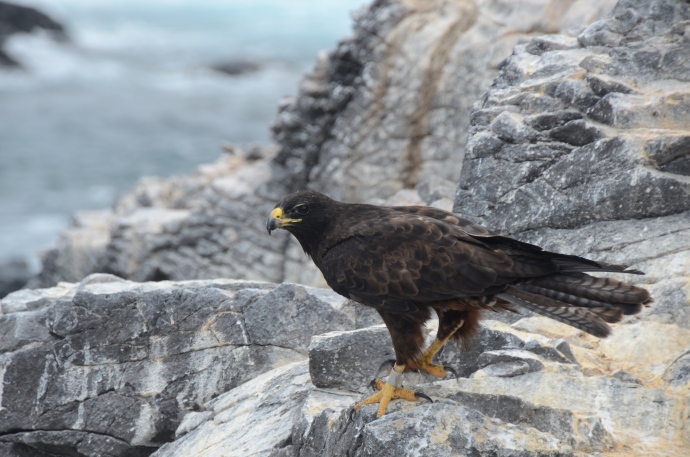 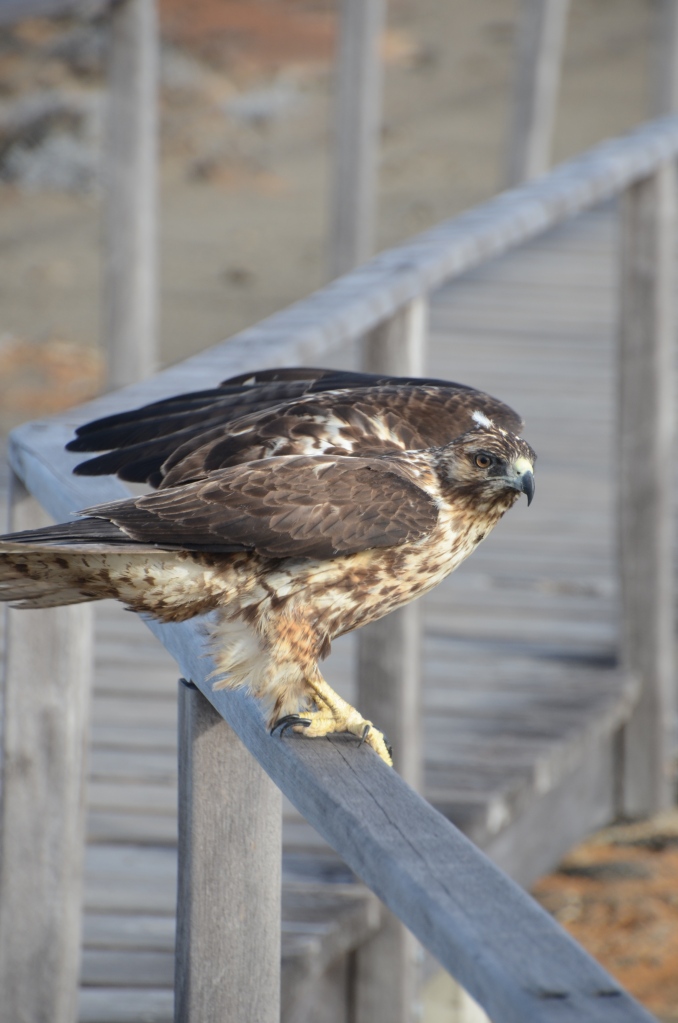 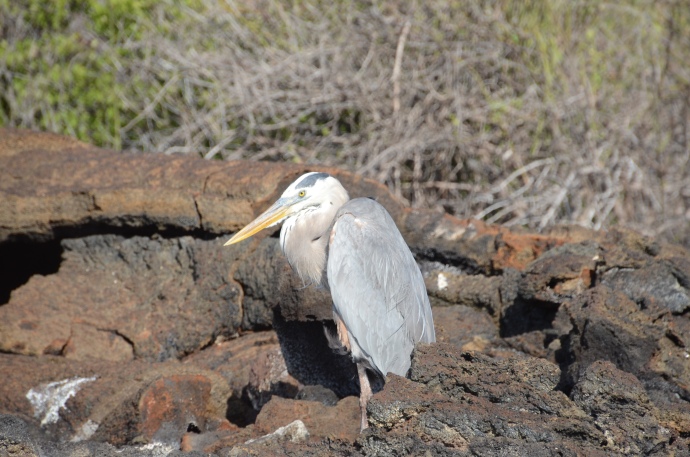 A great blue heron in the sunlight 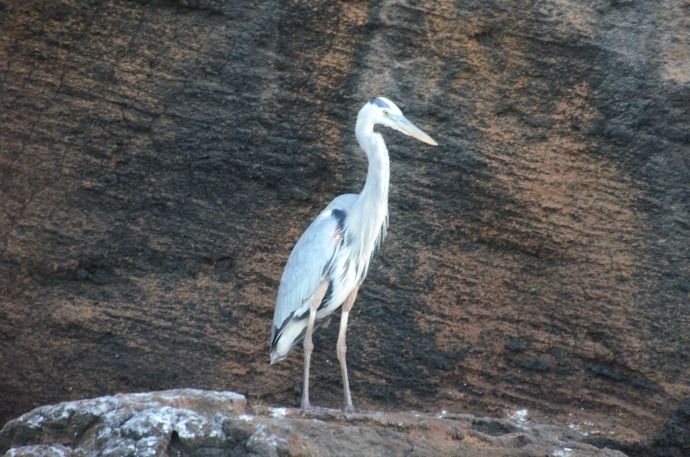 Greater Flamingos used to nest in large numbers along the brackish water on Floreana Island. The lake is drying up and most flamingos have moved to another island.  On the day we visited, one was in residence. 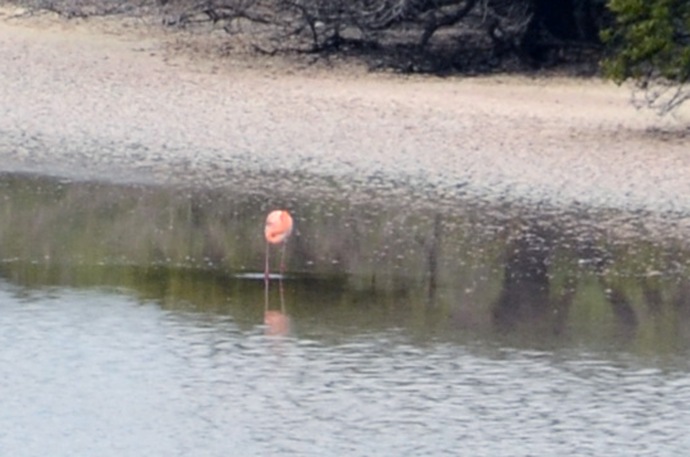 A pink flamingo. This photo was cropped from a larger one. For some, this bird never lifted its head. Perhaps it was ashamed that it was the only one there and its friends were partying on another island.

Throughout the islands, there are thirteen distinctly different finches made famous by the studies of Charles Darwin.  Each has physically adapted to a different part of the food chain, enabling more species to survive on these islands with limited resources.  The Interpretative Center on San Cristobal offers an excellent display. 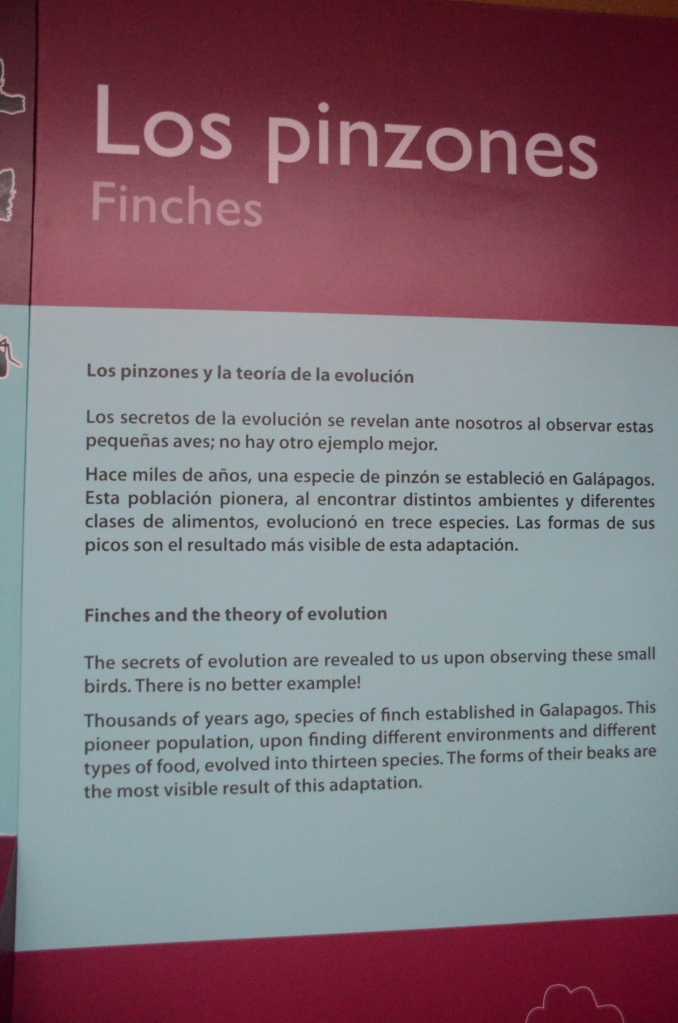 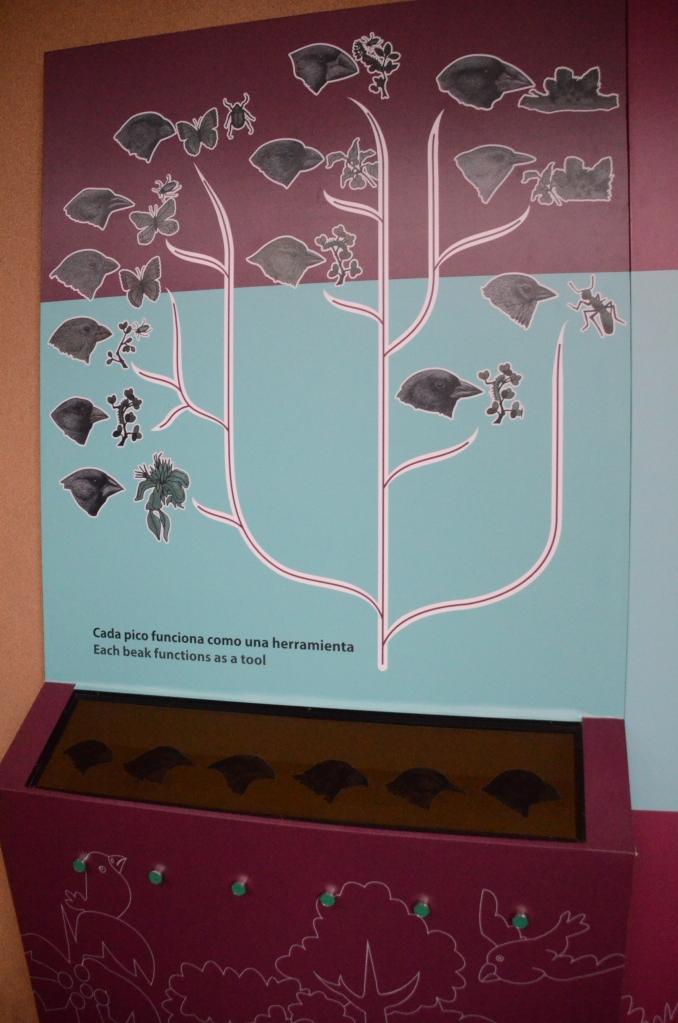 A display at the Interpretive center showing the different type of finches found on the Galapagos Islands.

Hood Mockingbirds are native to Española Island and are very territorial.  They are not afraid of humans.  This is the only species of Galápagos mockingbird that Charles Darwin did not see during the voyage of the Beagle. 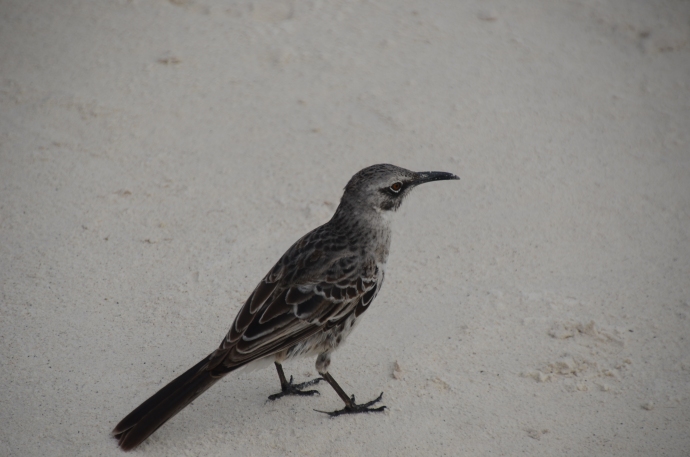 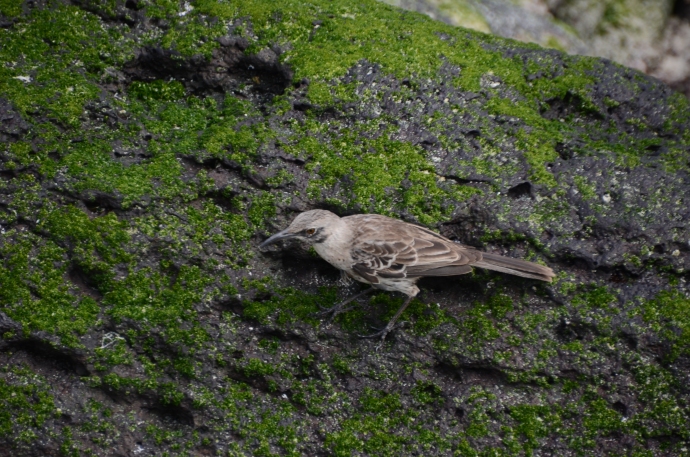 Hood mockingbird on Espanola Island (sometimes we can’t decide which photo we like more, so we put them both in the post)

Waved Albatross nest predominately on Española Island.  They are the only albatross in the Galápagos and coastal regions of Peru and Ecuador.  Their typical wingspan is over seven feet and they can live for forty years.  Their feet are blue, although not nearly as vibrant a blue as the blue-footed booby. They soar in wind currents and can stay in flight for long periods of time.  Waved Albatross have been known to travel over 60 miles from the nest, to find food for their chicks. 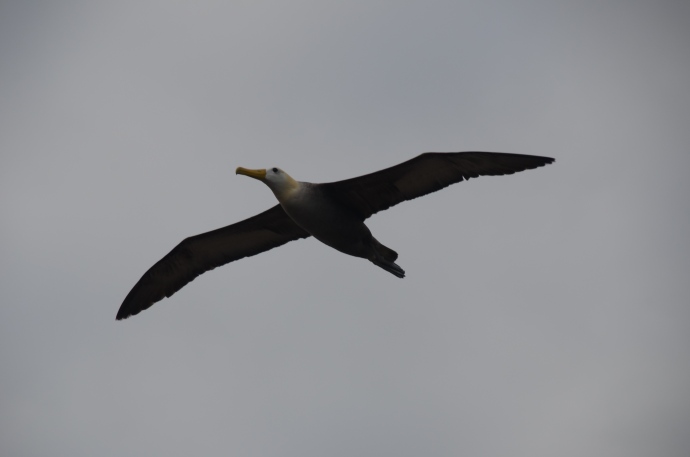 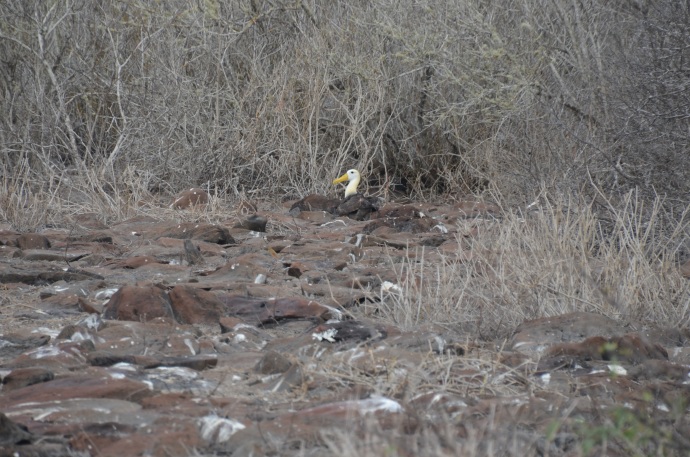 A waved albatross tends to her egg. There isn’t really a nest; the albatross turns the egg by rolling it along the ground, ending about 250 feet from where it started.

Swallow-Tailed Gulls are fly-by-nights, except during breeding season.  They prey at night on squid and small fish in the open ocean.  Their grey and white bodies are supported on land by orange-red feet.  Their beaks are grey-tipped, then black, with a white mark in front of the red-rimmed eyes.  The internal physiology of their eyes enables them to be nocturnal hunters 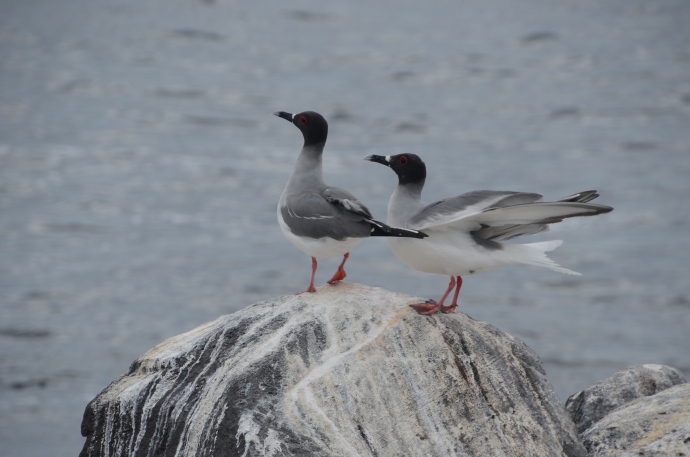 And to close, a bonus shot: 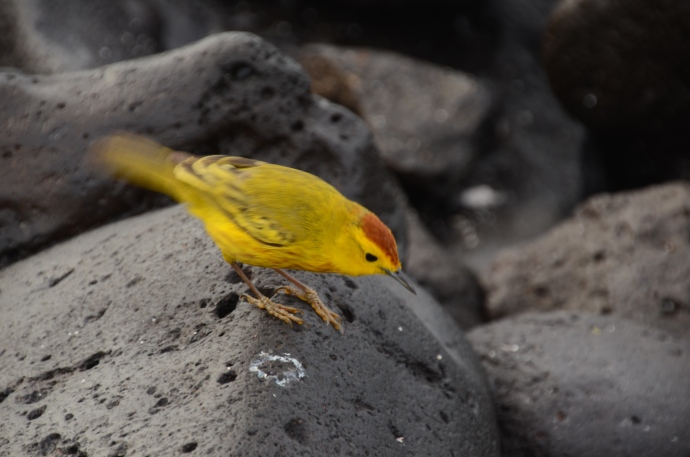 We believe this is a wild canary, moving its tail quickly