Posted on February 3, 2016 by twowhotrek

For Two Who Trek, fresh brewed coffee fills our morning senses with contentment and fortifies our ability to handle the day’s challenges.  Location is everything and a Juan Valdez Cafe is just down the street.  When our coffee supply gets low, help is just around the corner.

The image of Juan Valdez is synonymous with authentic Colombian coffee.  Since 1958, the fictional character of a Colombian coffee farmer,  representing the National Federation of  Coffee Growers in Colombia, is Juan Valdez.  He is sometimes accompanied by his burro Conchita, carrying sacks filled with  harvested Colombian coffee beans.

We have expanded our coffee knowledge considerably on this adventure.  Most coffee is grown on smaller farms at elevations ranging from 4500-7500 feet above sea level.  The coffee bean cultivated in Colombia is Arabica.  Grown only at higher elevations, Arabica originated in the mountains of Eastern Africa.  While there are several varieties of coffee beans on this planet, Arabic and Robusta are the two most common.  Robusta is cultivated at lower altitudes and although more disease-resistant, is not as globally consumed. 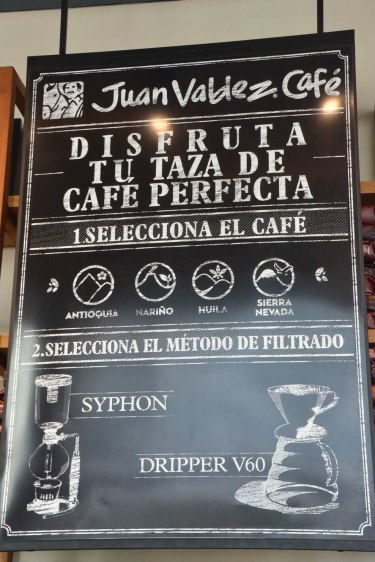 The Juan Valdez Café offers two different methods of brewing their single origin coffee, by either the siphon method or by the drip approach.

Coffee was brought to South America in the early XVIII century by Dutch and French traders.  Now, 20 of the Colombian departments grow coffee. (Geography Lesson: There are 32 departments or geographic regions in Colombia. The 33rd national administrative department is Bogotá.)  Coffee beans are green, change to yellow, then are ripe when red.  Ripe beans are also called cherries.  Much information about coffee bean harvesting and processing is available elsewhere.

A Juan Valdez barista, Abel, gave us a brief primer on coffee preparation and brewing. 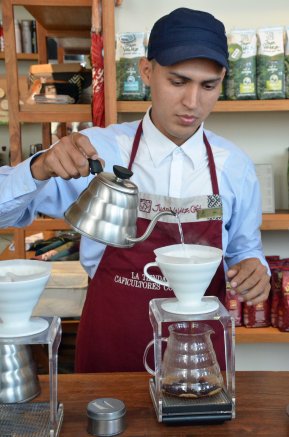 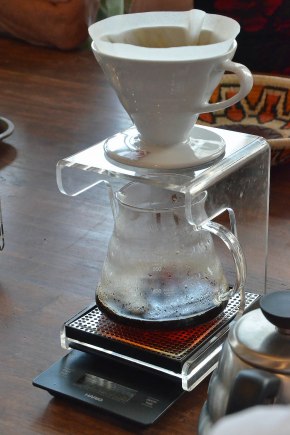 A scale built into the bottom of the drip coffee maker tells when the correct amount of product has been created. 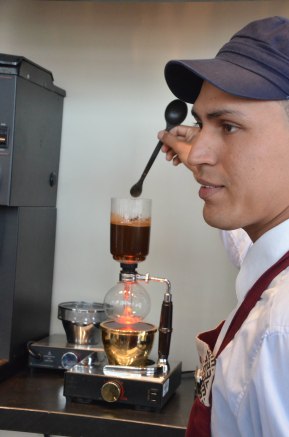 Abel has just added ground coffee to the top of the siphon coffee maker and is stirring the mixture.

Distilled water should be used when possible. 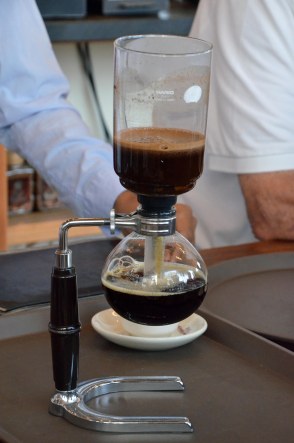 A siphon coffee maker, about halfway through the brewing process.

For a video on the siphon coffee-making process, check out our video.  It is very much like watching a science experiment but with delicious results:

A few words on grinding may be helpful:

There are three main grinds:

Whatever your preference, please remember that fresh is best! 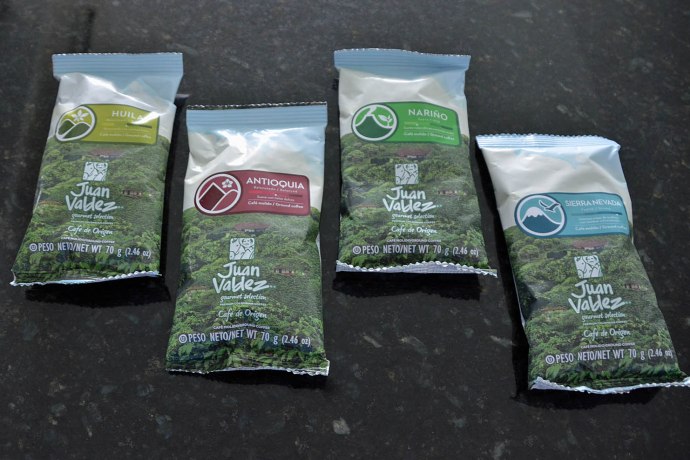 One thought on “Coffee Break Time”