After a five hour layover in Atlanta, Two Who Trek boarded the Boeing jet to Quito, Ecuador at 5:45 PM. You probably expect horror stories about the flight.  Not in this case.  Joe had shelled out extra money to  purchase seats in the emergency exit row, giving ample legroom.  There was an added bonus.  We were seated next to a Quito native, now a citizen of the United States.  He enlightened us with tales of the delights of his country and the trip time just flew by. (Yes, a bad pun).

We arrived ahead of schedule, at 11:40 PM.  Things began to slow down.  It took over an hour to navigate the serpentine line of Ecuadorian Customs &  Immigration and score the coveted passport stamp.  On to baggage claim.

As Sherri picked up her suitcase, she found a cell phone lying on top of it.  She presented it to a cadre of airport personnel congregating around an official-looking station.  A non-uniformed gentleman was obviously upset and explaining that he needed to find his lost Android cell phone.  His eyes lit up and he shouted with delight when Sherri gave it to him.  Her reward was a big hug.  Quite the warm welcome to Ecuador!

About 1 AM we finally exited the last of the security doors and were greeted by a tour agent with our names on a sign.  He escorted us to a bus from the Swissotel, our next destination, spoke to the bus baggage handler,  then directed us and our baggage to a little Suzuki SUV.  Joe asked if there was no space on the autobus; the man replied “Si”.  We quickly realized he didn’t understand English.  Through pantomime, he showed us he needed to get more people.

Sitting in the Suzuki for quite a while, we wondered if we should get out and talk to the Swissotel bus driver three parking spaces away.  It was then that we heard the Suzuki car alarm set beeps.  A minute later, the man returned with a family of 5 and indicated we needed to get into a taxi.  The family was to be shoehorned with a mountain of luggage into the tiny vehicle.  With really bad Spanish, we tried to find if he was paying for the taxi, and he said “Si” again.

The taxi waited for the tour agent to take the lead.  It was an adventuresome ride through the nearly-deserted streets of Quito.  The tour agent would make left-hand turns from the right lane, in front of traffic.  He dashed through lights, either apparently forgetting our taxi was following him or making believe he was in a Hollywood movie trying to outrun the opposition.

At about 1:45 AM, we pulled in front of the Park Hotel, and were instructed to go inside.  The only problem was that we were booked into the Swissotel.  So off on another ride to the correct hotel, this time in a much tamer fashion.  We pulled into the Swissotel right behind the bus we should have be on.  Seems they had waited for us to show up.  The tour agent had actually been with the Park hotel, and had been filling in while the correct representatives had escorted other passengers to the bus.  Obviously, he didn’t communicate with Swissotel staff any better than he did with us!  Plus Joe had to pay for the taxi.

We finally got to bed about 2 AM, 23 hours after we had last slept (and that time was only for 3 hours).  We weren’t in the Swissotel long enough to form a Trip Advisor opinion about the place, although the included breakfast was good.  We met our group at 9:30 AM for the flight to Cuenca.

We did observe that Quito is an interesting place, full of diversity and contradictions.  From our room window, we could see some of the old housing:

The view from our room in Quito

When we exited on the street side, we were greeted with an ultramodern city: 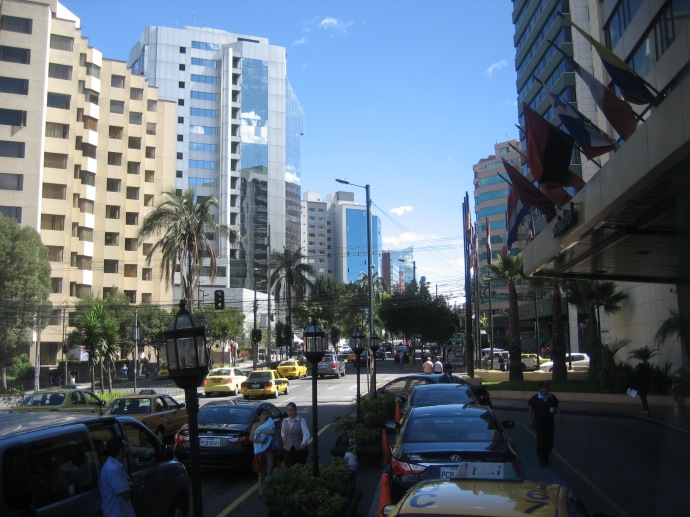 Outside the Swissotel in Quito

Quito is a large but oddly shaped city.  It is 30 to 40 miles long, but less than half a mile wide. The airport had been originally built in the countryside but the city had developed around it.  A new airport is mostly finished and awaiting a completed access road.  The target date for the new airport is February 2013.  This photo taken as the plane to Cuenca prepared to take off shows just how close those buildings are:

Showing just how close the buildings are to the runway

Next stop on our adventure – our home for a month, Cuenca!