Cuenca, Ecuador is a fantastic place to spend New Year’s Eve!  No, wait – that’s not quite correct.  Cuencanos celebrate “Años Viejos”, the Old Year.  The festivities are more focused on saying farewell to the old year than in welcoming the new one.  However, all the celebrations are much more elaborate than any in the United States.

First, there are fireworks everywhere.  Cuenca is the leading producer of fireworks in Ecuador and is a major exporter.  Hence, fireworks are cheap here.  For $1, you can buy a really impressive sky rocket.  $40 US will get you a box of fireworks that, when lit, will fire one sky rocket after another for about a half hour.  This box alone is more impressive than some of the displays at the end of minor league baseball games.

Fireworks vendor on the street.

Throughout the afternoon and evening, residents shoot off firecrackers and booming skyrockets, making the area sound like a war zone.  When the sky turns dark, the fun really begins.  Every neighborhood starts shooting elaborate skyrockets, with the bulk peaking at midnight.  Just to give a feel of the fun, here is a video shot a few minutes before midnight, showing the activity over the newer part of Cuenca, to the south. This area is less than a quarter of the Cuenca area.

Another part of the celebrations involve creating something called monigotes.  For New Year’s Eve, a monigote is a doll-like figure made of old clothes stuffed with paper.  Some are papier-mâché creations representing popular figures.  Usually a monigote is created to represent something negative from the ending year. The monigote accompanies its creator for hours to days before it is burned in a huge street fire at midnight.  This symbolically eliminates the problems of the old year and ensures good luck during the new one.

Monigotes are easy to obtain.  Most street corners have vendors that sell the bodies of the effigies.

Monigote bodies on the street corner.

When you have purchased the body, you then need a mask. These are also found at street corner vendors:

Masks for monigotes, although they are worn by people, too.

Two Who Trek decided to get in on the fun.  The body of our monigote cost $3 and the face mask was $2.  Sherri named ours “Fred the Strawman”, after two negative influences in her life that she would like to eliminate.  Fred accompanied us everywhere all afternoon. 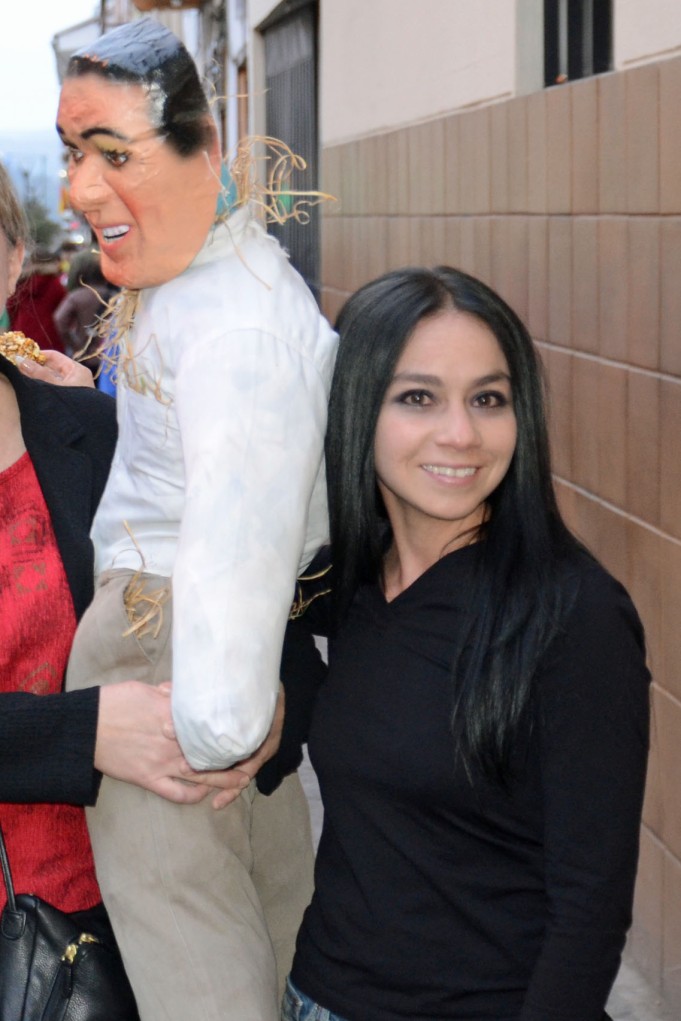 Fred, but not with Sherri (sigh)

Fred and his monigote friends party during supper.

However, it’s not just individuals that have the fun.  Starting about noon, many neighborhoods close down streets and create their own display.  A prize of $3000 is awarded to the neighborhood with the best display.  Most of these displays have a political theme.  Here are a few examples:

Death spins the earth over a barbecue – an environmental statement 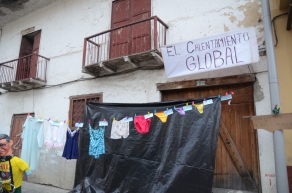 Global warming statement — swimsuits get smaller as the world gets warmer 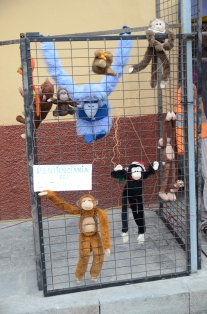 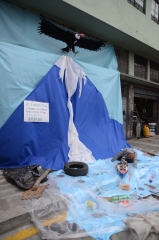 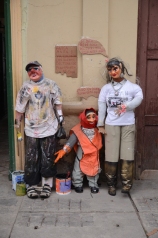 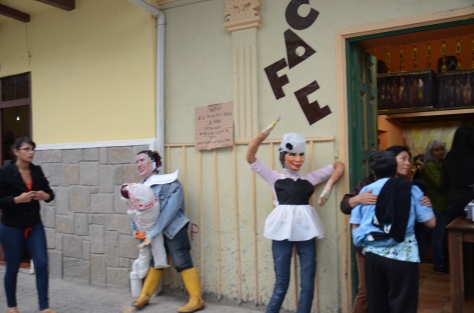 Stores often put monigotes outside their businesses. Here’s a waitress for you.

detail of a neighborhood display

Detail of a neighborhood display

During the day, young men dress up in women’s clothing, and become the “viudas del año viejo” (widows of the old year) or widows of the monigotes.   These men stop traffic by pulling ropes across the street, to collect money from drivers and other passers-by.  They use the money to celebrate, so generally they receive pennies and other small change:

Finally, all the displays and monigotes are burned in street bonfires at midnight, purging the bad spirits.  Bonfires spring up everywhere.  Because the streets are all paving blocks (not asphalt), the fires do not damage the streets. 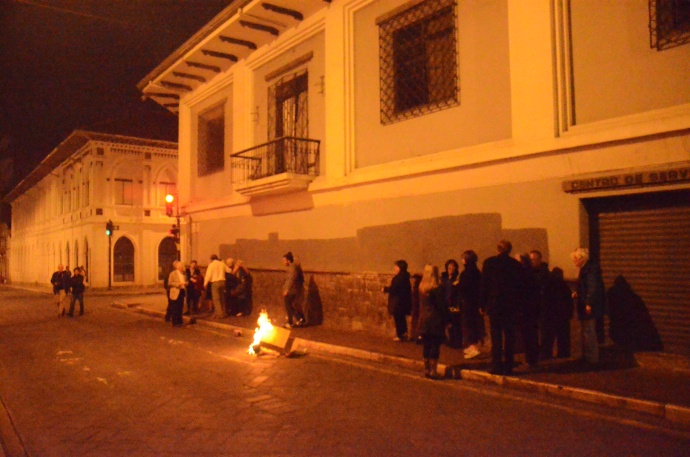 Tryin’ to set the night on fire

Fires on one block of the street.  Notice the smoky haze by the street lights.

Even Fred had to meet his destiny:

Bye, Bye, Fred
(His legs and torso are at the edge of the fire)

By about 12:15 AM, the street parties have wound down and the fireworks come to an end.  Two Who Trek arrived back at the apartment about 12:40 after walking through nearly deserted streets.  Only a few house parties were still going.

A smoky haze hung over the Cuenca valley until about 4 AM.  Early the next morning, the sanitation department had cleaned up most of the ashes from the bonfires.  The old year has passed.  Welcome to 2013!