We’ve talked about the wonderful fruit and vegetable markets in Cuenca.  However, many of the items are different from what we would find in the United States.  Today Two Who Trek looks at some of the unusual fruits we discovered in the markets.

First, TWT has a general observation about the quality of the produce available at market.  Most of the fruits are grown in Ecuador and the crops are picked closer to full ripeness than those shipped overseas.  At the time we were in Ecuador, only black cherries were being imported and those came from nearby Chile.  Flavors overall were more intense than the imported produce we might get at the super market back home.

Take oranges for an example.  Toward the end of our stay, we realized we hadn’t tried any oranges.  After purchasing eight for a dollar, we sectioned one.  It had a lot of seeds, but an excellent sweet flavor.  We then invested 74¢ into a plastic juicer and made some of the best juice we had ever had – even better that the fresh squeezed we have had in Florida.

One of the vendors from which we bought fruit 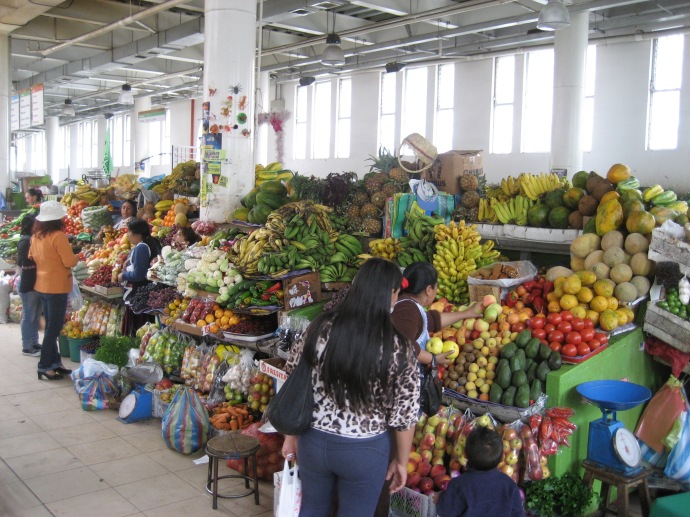 Two vendors in the market selling fruit to customers

Here is a look at some of the more unusual fruit we found:

This fruit looks like an old-fashioned hand grenade.  The product of the Passiflora ligularis plant, it is yellow to orange in color and is generally round with a tip that ends at the stem.  The outer shell is firm and slippery.  Inside the shell has padding that protects the seeds, the edible part of the fruit.  The seeds are in a gelatinous mass that is quite sweet in flavor.

Often Cuencanos will eat the fruit as a snack.  As we wandered the streets, we would see the husks of the fruit lying about, where someone had poked a hole through the skin and sucked out the pulp.

Some locals refer to the fruit as “monkey brains”, because of a supposed resemblance.  Whenever one half of Two Who Trek heard this description, she would state how eating real monkey brains could pass around the AIDS virus.  She would then lose her appetite, which would leave more granadillas for the other half of the team, who had no qualms about eating such a delicious treat (the fruit, that is, not actual brains which even he wouldn’t touch).

Pitahaya is a fruit from a certain type of cactus plant.  The type commonly found in Ecuador is the yellow variety (other types feature a red skin).

The outside skin is bumpy, leathery, and generally ugly with what appears to be leaf growths on the skin.  However, the meat inside is a creamy white fleshy substance interspersed with dark edible seeds.  The pitahaya is somewhat sweet and has a delicate aroma.  Varieties of pitahaya are sold in the United States as dragon fruit, but don’t have quite the flavor of the Ecuadorian fruit.

Several types of bananas can be found in Ecuador.  There’s the normal yellow banana (called the Cavendish banana) that we are accustomed to eating.  Another type is the red banana. 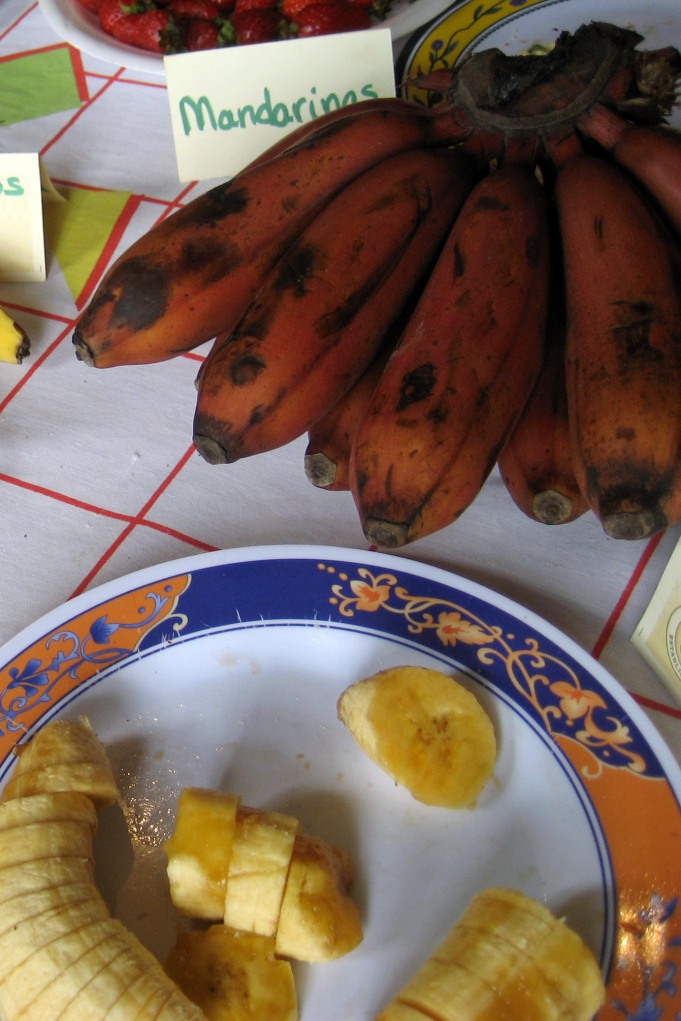 In the United States, these are a small banana.  But in Ecuador, they are the length of a yellow banana but thicker in diameter.  Featuring a deep red peel, the red banana has a slightly pink flesh.  They are richer in flavor and nutrients than regular bananas and can give you the South American Quick Step if you eat too much without becoming acclimated to them first.

This banana’s name is translated as “bananas of gold”.  A short, stubby banana with a dark yellow skin, the flesh is also yellow and very sweet. 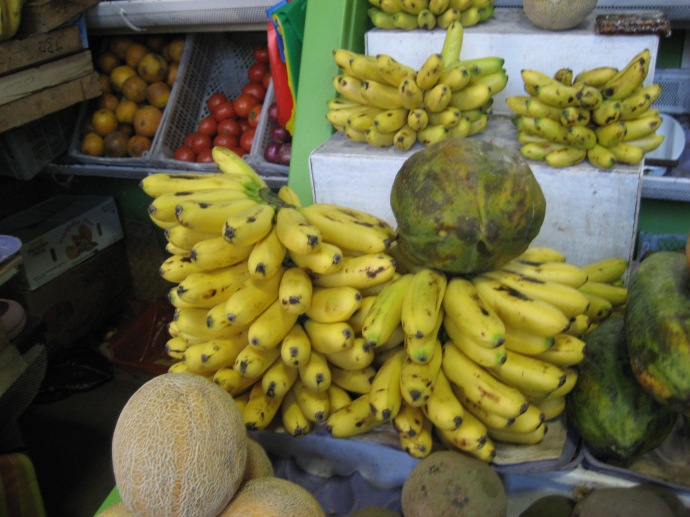 Plantains, the green banana that is much larger than the common Cavendish banana, are also common and used for cooking.  Plantains are not as common as they are in some Caribbean countries like the Dominican Republic. Ecuadorians prefer potatoes, rice and sometimes yuccas as side dishes over plantains.

Plantains on the market shelf, with our normal bananas to the right

Translated as “tree tomato”, this plant is native to the Andes and is popular in Ecuador and neighboring countries.  While similar to appearance to what we consider a tomato, (known as tomate de rinon in Ecuador,) the flesh of the tree tomato is tangy.  The skin and the flesh next to the skin are generally not eaten.  Ecuadorians like to take the flesh part and mix it with sugar and water to make a juice.  Drinking the juice at restaurants is how we enjoyed it the most.  Using them for a pasta sauce, Two Who Trek found them a bit too acidic. 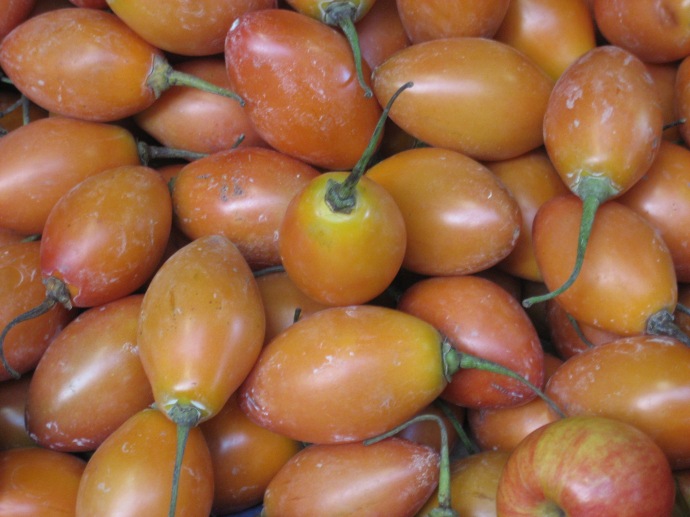 Tomato de arbor or tree tomatoes, in the unwashed state

We could go on at length about the other fruits we found.  But many of them were ones we would find back home, such as pineapples, mangos, plums,  and grapes.

We enjoyed fruits every morning for breakfast, often mixing several together.  They shared the breakfast table with edible masterpieces from a local bakery.

The most elaborate breakfast at the apartment, toward the end of the trip

Even though this post is about fruits, Two Who Trek did keep a well-balanced diet.  Here’s some vegetable photos, while they are fresh at the market. 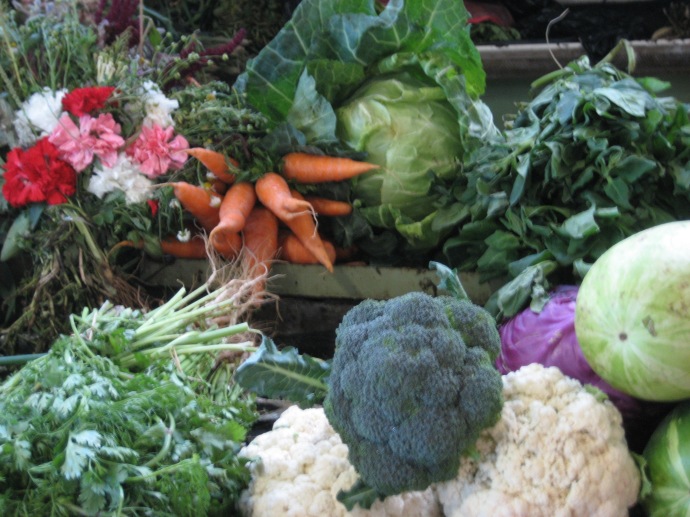 Fresh vegetables and a few flowers in the market

Some of the many varieties of potatoes in the market