Heading to the Galápagos Islands

When last we left Two Who Trek, the dynamic duo had returned to Michigan after their Ecuadorian adventure. In their last post they promised to include information about the Galápagos Islands. However, it’s been months since we’ve heard from them. What has happened?

All of those items combined to throw this blogging project off-track.  But throughout the past months, Two Who Trek continued to have adventures. Now that things have calmed down during the post-Christmas winter months, we intend to get caught up.  So let’s get started with reviewing the Galápagos adventure.

As mentioned in an earlier post, our month in Ecuador included a “spring break,” even though it was the middle of January. For this break, we decided to go visit the Galápagos Islands. Many Galápagos trip providers had “last-minute deals” on unsold rooms in ships and hotels.

Three options exist for Galapagos visits.  First, one can fly in, stay on one of the two islands with hotels, and never leave that island.  To us, that would be boring and a waste of the opportunity to see the many amazing sights the island chain offers.

The second option is to stay at a hotel and take a boat each day to a different island.  The problem with this choice is that you have a couple of hour boat ride in the morning and again in the evening just to get to where you need to be.  If the weather starts getting rough, the tiny ship is tossed.  We all know what happened to Gilligan under similar circumstances.  The primary advantage is that you can sleep in a bed that isn’t rocking and rolling at night (unless the three Tectonic plates under the Galápagos Islands are acting up).

We opted for the third choice, staying aboard a ship.  This choice is best for seeing much more of the island chain without wasting time.  The ship moves from one island to another at night.  So at 7:30 am you can have breakfast and by 8:30 you are ashore for island exploration.  All meals are included, by the way, but we did pay for any alcoholic beverages that were consumed.  We learned that small ships (16 passengers or less) offer better experiences.  Ships of this size could anchor close to the drop-off points on islands.  In addition, the naturalist on board (each ship is required to have one) that leads the shore tours has more flexibility in remaining at sites.  Bigger ships with 100 to 200 passenger capacities are available, but the shore excursions are a mad house as everyone is trying to see the same things at once.

Leaving on a Jet Plane

Getting to the ship was an adventure in itself.  Flights to the Galápagos Islands originate in Guayaquil , Ecuador. From Cuenca we could either take a one hour flight or we could hire a car and driver that would make the three-hour trip over the mountains to Guayaquil for about one-fourth of the price of air travel. [i] Easy choice for us  — we wanted to see more of the country.  By choosing the car, we could see several of Ecuador’s major microclimates. Our driver, who spoke no English, took us in his small Chevrolet across the 14,000 foot Très Cruses mountain pass, through a rain forest and finally into the coastal tropical area outside of Guayaquil.  Because we arrived the night before our early flight to the islands, our driver also showed us the Malecon and took us to a barbecued meat restaurant near our hotel that was a popular hangout for locals. 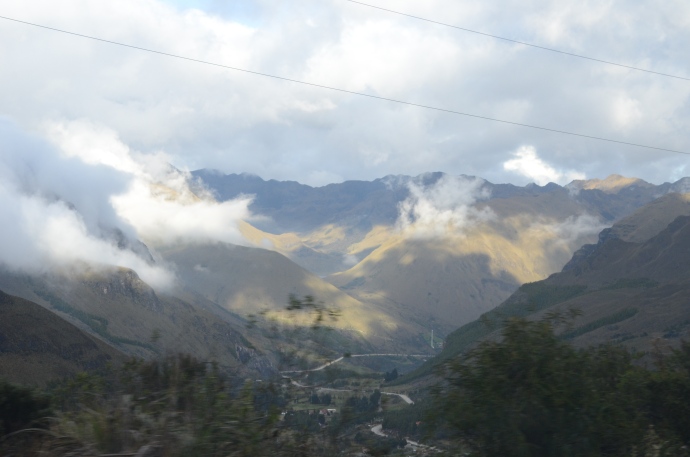 When arriving at the airport the next morning, we were instantly confused.  All the monitors looked like this: 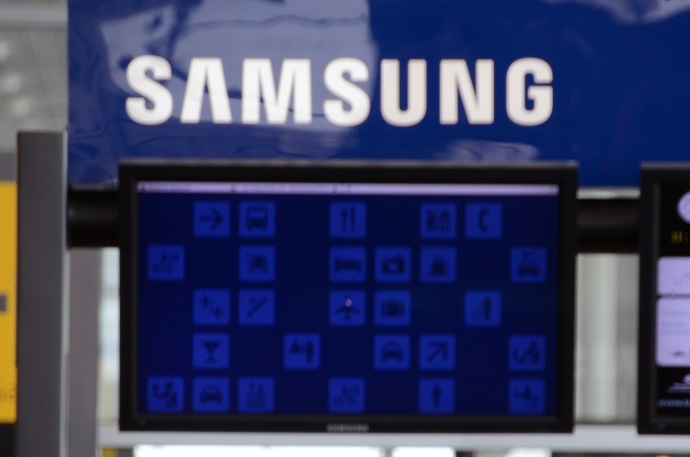 Really useful monitors at Guayaquil airport. At least Samsung gets a promo

It was too early for the airport to turn on the monitors.  We knew we weren’t flying Samsung Airlines, but we did find the queue for AeroGal, the carrier that provides flight service to the islands.  When we reached the head of the line, we found we were in the wrong place.  We needed go through Galápagos immigration first where our carry-on bags were inspected for prohibited items.  Then we could get back in line at AeroGal.

No problem.  We did as instructed (in Spanish, with a lot of hand signs by Joe to make sure we were in the right spots (“Uno” – pointing there, “Dos” – pointing here, “Tres” – point way over there).  The flight was delayed but the waiting area was nice. 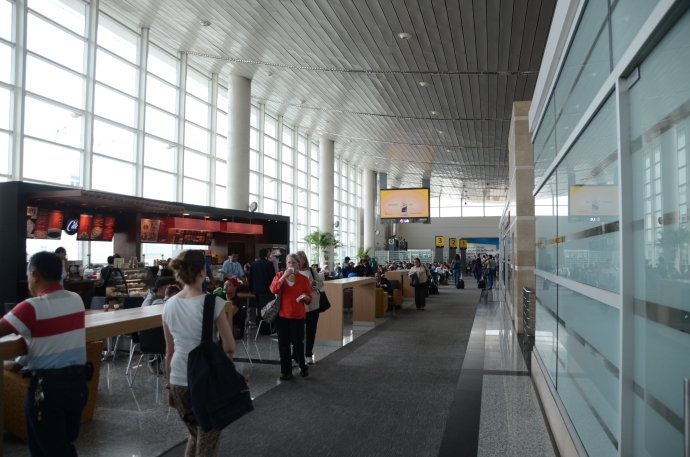 We flew to San Cristobal Island to meet our ship.  When you arrive, one of the first things you do is pay $100 US for the admittance pass to the island.  Bring cash – no credit cards are accepted.  This funding goes to help preserve the Galapagos National Park. 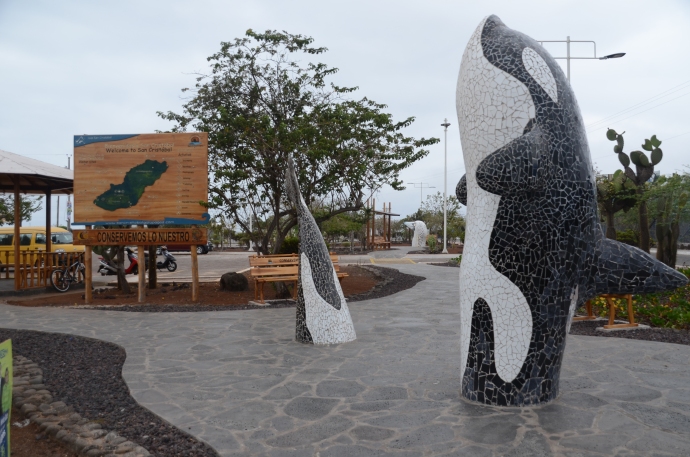 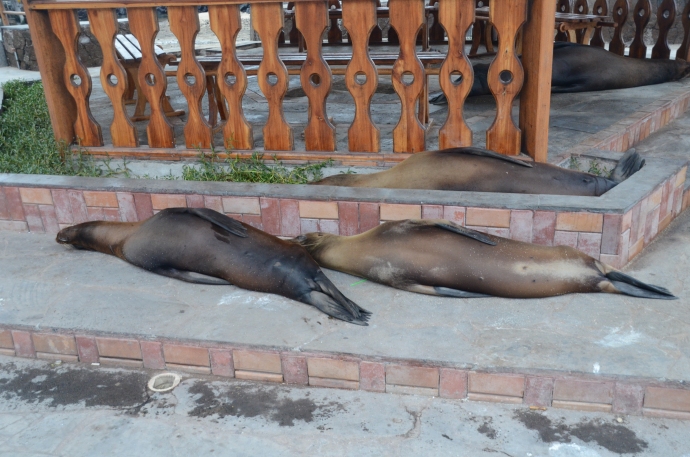 Sleepy San Cristobal residents. These seals are everywhere along the harbor.

Our guide met us at the airport.  After a tour of the city and the Interpretive Center, we were taken to our ship.  Our home for the next five nights was the MV San Jose , a motor yacht that would accommodate 16 passengers. 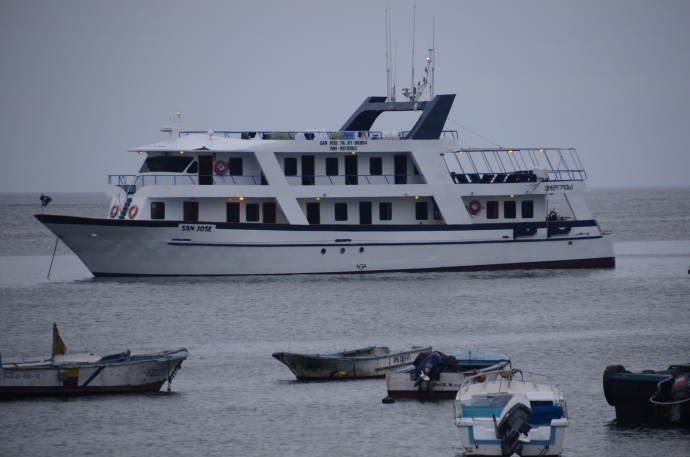 Our first view of the MV San José, at dusk in San Cristobal.

Here are some views inside the ship: 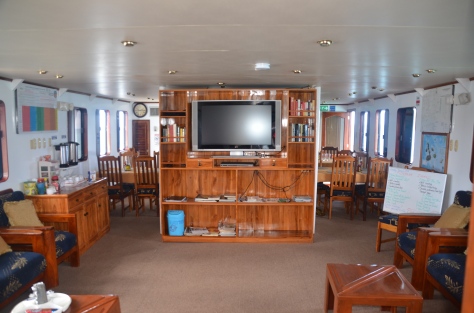 The main lounge aboard the MV San Jose. The white board at the right gave the day’s itinerary. The dining area is directly behind the entertainment center. The tv was used to show videos taken by passengers or DVD’s about Galapagos exploration 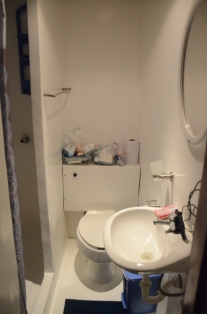 The bathroom in our cabin aboard the MV San Jose. The shower is to the left. 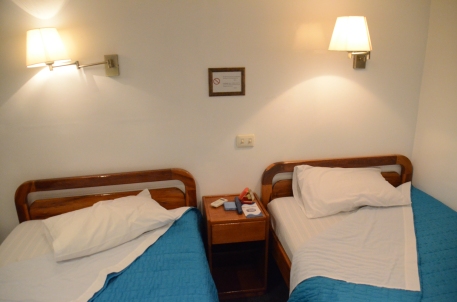 Our cabin aboard the MV San Jose. There is a small dresser/desk in the corner directly behind me. Twin beds, of course.

The dining area of the MV San Jose. Hot food is served in the trays in the center of the photo.

Another view of the food serving area aboard the MV San Jose. Hot drinks are found on the far right.

The main lounge aboard the MV San Jose, where we would all gather for daily briefings.

Well after dark, we motored out of San Cristobal harbor on the way to our first day of exploration.  But instead of giving a detailed account of all the experiences, the following posts will talk about different types of things we saw, arranged by category and not chronology.   Next up – an overview of the Galápagos Islands and more.

[i] There is a third choice – intercity bus.  This option is really cheap (about $7 one way) but crowded and often smelly.  Schedules are unreliable and we would have added expenses in arranging travel within Guayaquil.  We figured we didn’t want to overdose on adventures so this choice wasn’t considered too long.  But we did ride an intercity bus for another Ecuadorian exploration.

One thought on “Heading to the Galápagos Islands”